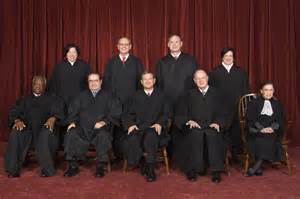 It has been more than obvious for a long time that the proponents for same sex marriage would eventually win their quest to redefine marriage in America. However, their strategy of using liberal judges to overrule the democratic process hastened this victory with a shocking swiftness that no one anticipated. Recall that the citizens of California and of many other states voted to retain the traditional definition of marriage—one man and one woman in a life-long covenant one flesh union. Consider how recently politician after politician won elections running on the platform of defending traditional marriage (Bill Clinton’s support for DOMA, Obama's clear stance in the 2008 election, and Hilary Clinton's reaffirmation as late as 2013). All the while though, liberal justices continued to chip away at the timeless definition of marriage. And then seemingly out of nowhere on June 26th 2015 the Supreme Court in a 5-4 liberal driven ruling redefined marriage as a union between two loving adults and made gay marriage the law of the land even in states that voted to uphold traditional marriage. The fight for America’s legal definition of marriage is over. The victory in the Supreme Court for gay marriage is decisive.

Justice Kennedy in his majority opinion argued that marriage is a fundamental right. Therefore based on the 14th amendment equal protection clause, gays cannot be denied the same fundamental marital rights as heterosexuals. The government, he concluded, has no compelling interest in infringing on that fundamental right. He argued that attempts to do so attack the dignity of gay couples. Therefore the liberty and equality of gay Americans guarantees them under the constitution the fundamental right to marry. Hence no state legislative process can deny gays the right to marry or refuse to recognize their marriages.

So in response to the legalization of gay marriage, what is a Bible believing Christian to do? Let me offer several admonitions from the Bible.

1.   Keep speaking the truth in love, the Bible commands you to (Eph 4:15). You are not a hatemongering, backwards, insensitive bigot just because you still support the biblical definition of marriage. In fact, you are in good company. Even in homosexuality-affirming cultures like the Greeks, no great thinker, no great moral leader in all of history has ever advocated changing the definition of marriage. Advocates of gay marriage would have you think that theirs is the enlightened moral high ground, but it is a position they alone hold, indicting all cultures and moral leaders in all of history. Jesus—the one whom the Bible declares and history confirms—loved greater than all and especially the outcast, and upheld the traditional timeless universal definition of marriage. God bestowed dignity upon all by making us in His image and likeness. Dignity isn’t gained or lost by one’s marital status.

2.  Know that God is wiser than 5 judges. No disrespect intended, but the Bible says, “Rather, let God be found true, though every man be found a liar, as it is written,” Rom 3:4. Judges are fallible. God is not. Only those who will love the truth of God’s Word (not man’s) about marriage will in the end see through the lie that gay unions are marriages.

3.   Keep affirming that God made a world of complementary opposites to make a whole. The world is comprised of land and water. A day consists of hours of light and hours of darkness. A person has a body and soul. A marriage by God’s design is between a male and a female so that they can become one flesh (multiply and fill the earth). Although the Bible states that from the beginning God made us male and female for marriage and Jesus affirms that in Matthew 19:4-5, postmodernists wrongly assert that there is no difference between same sex unions and traditional marriages. How obviously wrong is that? Try screwing two screws together rather than a screw and a nut. Why can’t we simply tell the truth that the Emperor’s new clothes of gender relativity are no clothes at all? I’m not tall because I feel tall and a person is not black because they feel connected to black causes. Neither is an anorexic woman, who is dangerously thin, too big because she feels fat. The ancients all knew this. Why are we rejecting it? Aristotle said eons ago: