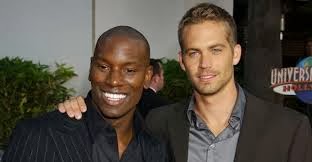 Sunday, I preached at Pathway Bible Church, a block away from the memorial for Fast & Furious actor Paul Walker. After the worship service, my family and I slowly rolled through the massive crowd of grieving fans and sports car enthusiasts he inspired.

I couldn’t ignore the tragic irony that the text from which I preached, a text I had chosen weeks earlier, was Psalm 73. Psalm 73 is a wisdom Psalm. It warns believers not to be seduced by the glamor and fun of those living fast and furious lifestyles. It teaches that their end will come fast and furiously in a way that will be anything but glamorous and fun (73:18-19). It is a message that all people need to hear over and over again, especially the young and impressionable.

I can’t tell you how many times I have almost died doing foolish things. God is gracious and patient to all, but the message of Psalm 73 must be heeded. The God, who is gracious and patient, warns that our choices have consequences even when the consequences aren't immediately manifested. Hollywood movies lie when they contradict this truth. Too often Hollywood glamorizes fast, morally loose, and reckless lifestyles as being only exciting and fun. The real truth is told in Psalm 73. Sin can be fun and exciting and may even be prosperous, but only for a short season.

Paul Walker’s dad knew this truth. The media reported this warning he had given to his son. “The last conversation we had, I sat there, I looked at him and I said, ‘You know, I love you very much. I love all of you. And we’re all very, very close. If anything was to happen to anybody in this family, it would be a rough deal,’” He added, “Promise me, no more daredevil stuff.” I looked at him, I said, “Will you promise me that?” Paul only answered, “OK.”

My heart breaks for Paul Walker's family. What parent doesn’t dread the prospect of getting a call that his or her son or daughter has died in a tragic way. I am praying for his parents and his 15 year-old daughter, and I pray that all who hear this story will stop and pray for this grieving family.

But for Paul’s Hollywood fans, there is another message that I hope they will carefully consider. The Bible soberly but truthfully teaches that living foolishly is sin and that sin carries a hefty price—death. And God, who is gracious and patient, declares that He will by no means leave the guilty unpunished. He, therefore, commands sinners to confess that they have rebelled against Him, and acknowledge by faith that His Son, Jesus, paid the penalty for their sins when He died on the cross. As the only one who rose from the grave, who defeated sin and Satan, Jesus promises to pardon sinners who turn from sin to trust in Him and to give them eternal life, and by the Holy Spirit, the means to live a life of wisdom that pleases God.

My prayer is that from the tragedy of Paul Walker’s death, a greater tragedy will be avoided—more deaths because Hollywood’s lies and tries to hide the truth of Psalm 73. Fast and furious lifestyles are only fun for a moment yet they lead to an eternity of pain and suffering. Instead, live by faith in Christ, free from the carnal enticements of Hollywood. The cost of such a sacrifice will only be for a moment but will gain for you an eternal reward of glory. Choose your path of life by faith in Christ, heeding the Word of God and live wisely. Then and only then will you experience true abundance of life.

Posted by Pastor Bobby Scott at 1:34 PM No comments:

Saw this on Voddie Baucham's tweeter, thought it was worth posting. It's a clip from the show Wretched. Please be discerning saints.

Remembering that the players are more important than the game.


Posted by Pastor Bobby Scott at 10:10 PM No comments:

How Can Sistas Find Husbands When They Ain't There?

A brother in our church sent this to me today. Check it out and post your thoughts.


When I think about this dilemma, on the one hand, I want my sisters to know that nothing is too hard for God and on the other hand I'm thinking when men fail it affects women and children. No way around that. And a lot of brothers are failing.

My prayer at CFBC is that we intentionally and strategically help men to lead so that we keep attracting and developing strong men and that our church increasingly becomes the exception to this trend.

But I would also encourage my sisters that when God sends a godly man that they put a higher priority on marriage and family than on education and career.
Posted by Pastor Bobby Scott at 3:57 PM No comments:

Testimony of a Converted Lesbian

Posted by Pastor Bobby Scott at 10:09 PM No comments:

It's happening again, and it’s a bad rerun. A Christian in the public eye is asked about his/her position on homosexuality. S/he responds with biblical accuracy. The media, then, recasts the Christian’s response from being an answer to an unprompted question into an aggressive in-your-face homophobic attack. Then they (and the left) intolerantly attack the Christian for having a biblical belief. Anybody remember what happened to Dan Cathy, owner of Chick-fil-a when the left took his answer to a question about homosexuality from an interview in the Baptist Press? The article begins by stating that some have opposed the company's support of the traditional family. Cathy replies, "Well, guilty as charged." When asked about the company's position here's his alleged hateful homophobic attack. "We are very much supportive of the family -- the biblical definition of the family unit. We are a family-owned business, a family-led business, and we are married to our first wives. We give God thanks for that.” Hmmm, did I miss something? It's okay to support gay marriage but hateful to support the definition of marriage embraced by most of world history.
Now it’s Chris Broussard's turn to sit in the left’s hot seat and experience the left’s intolerance of Christians.
I had a chance to briefly meet him at the Legacy Conference in Chicago. He’s a solid believer who really loves Jesus. Check out his clear truth-in-love speaking biblical response. And see whose response is judgmental. Warning - the radio host is very crass.
Posted by Pastor Bobby Scott at 9:14 PM 2 comments:

I thank God for how well this three part sermon series was received. To hear it you have to visit our church website CFBC.

Also please pray with me. There is a book publisher interested in helping me get all 101 answers in print.

The Word of God offers answers to questions about singleness, dating, marriage, divorce and remarriage a whole lot better than anything we can get from the world’s wisdom. The Corinthians had many of the same relational struggles that we face today and the good news is that the Word of God in 1 Cor 7 answers them.
Posted by Pastor Bobby Scott at 9:30 AM No comments:


In 1 Corinthians 7, the apostle Paul answers questions that were posed to him by the Corinthian congregation about relationships and guess what we have the same problems (v. 1)

Posted by Pastor Bobby Scott at 9:16 AM No comments:

Truth in the City: Martin Luther King's Letter from Birmingham Jail: In light of Martin Luther King Day, I have posted in its entirety his letter written from a jail in Birmingham. I openly acknowledge as a bi...
Posted by Pastor Bobby Scott at 9:21 PM No comments:

What is a Masculine Male?

The Essential Fundamentals of Masculinity

“Men Must Know Who They Are and How They Must Act”

God designed the essence of masculinity in both a man’s being and acting.  It is engraved in what they are and revealed in how they (are supposed to) act.  Whereas sin marred what men are as masculine beings and how they act, the Spirit of God can renew a true masculinity in men and guide them to live in harmony with their masculine make-up.  A man’s goal, now, must be to yield to the Spirit’s work within him and to live like Christ—the perfect masculine man.

Definition:
Biblical masculinity is that divinely created make-up of man (our moral, spiritual, rational, emotional, relational nature) through which God displays His Own image and likeness (Gen 1:26).  Masculinity, in distinction from femininity, is seen when men live in accordance with their finite God-like being to fulfill their God-chosen gender roles (Gen 1:28). At its core, Biblical masculinity implies that men have the unique nature and responsibility (Gen 3:9, 11, 17) to maintain the God-centeredness of communities, churches, and families (1 Cor 11:3; 1 Tim 3:1; Eph 5:23).

Application:
In making men men, God has entrusted to men the most sacred stewardship of manifesting His glory in creation (1 Cor 11:7).  Masculinity, then, entails doing all that one can to become God’s agent and doing all that one can to fulfill that trust.  Masculine men assume that responsibility to be and act in the biblically prescribed ways necessary to influence their environments for God.
Posted by Pastor Bobby Scott at 2:21 PM No comments: