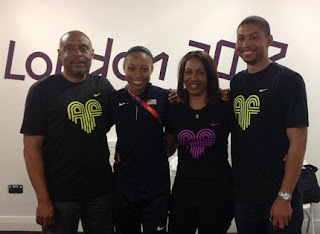 For many Christian Los Angelinos, the London 2012 Olympic Games will forever be special because of Allyson Felix. Her father, Dr. Paul Felix, a professor at The Master’s Seminary and President of the Los Angeles Bible Training School, has trained Christian leaders who serve all over the world. Allyson’s mother Marlean, as wise as she is beautiful, has touched the hearts of Christian women everywhere as a conference speaker. Her brother and manager Wes Felix, a standout track star himself, dominated the Pac-12 in sprints during his running days at USC. The Felix family is beloved by Christians near and far, and because of that, Christians everywhere were praying and rooting for Allyson.

So as Allyson entered the blocks for the 200 meters final, we all collectively held our breath, as she raced not for time but for history. God made her fast. The world already knew that. The question this 200-meter race would determine was if He made her as fast as the legends of track and field. It would take nothing less than gold to confirm that. Of course Allyson is much too humble to believe that she was running for history. But no other track and field athlete has ever accomplished what she has, winning the US national titles in the 100, 200, and 400 meters. Her margins of victory in the 200 are unparalleled. Her times are unsurpassed in history by non-steroid users. The span of her dominance approaching 10 years was already the stuff of legends, but  . . . not without winning on the grandest stage of all of human athletics—the Olympics. Without gold her legacy would say that she was only great.

So when the gun sounded uncoiling, her indomitable spirit into her effortless gliding stride, running with eagle’s wings for gold, His-story was confirmed. On August 8th at the London 2012 Olympic games, Allyson Felix ran into the annals of history, securing her place among the greatest track and field athletes—ever. While everyone rejoiced, and some shed tears of joy, I am sure that God smiled at the darling of track whom He had made. Well done, Allyson! Congratulations to the Felix family. You are an inspiration to many—certainly to me and my family—Soli Deo Gloria (to God be the glory)!!! I can’t wait for Rio.