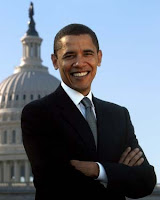 It says a lot, and it says a lot of good things to Americans and particularly to African Americans. Like millions of Americans I sat glued in front of my television last night. With grumblings from my 6 kids ranging from 3-12 at my side, I made them join my wife and me as I told them that they were witnessing one of the most significant events in American history.

White Europeans arrived on these shores of America in 1607, and in 1619 the first slave ship transporting Africans as cargo arrived. And for the next 250 years America’s new immigrants would be subjected to some of the most inhumane treatments that any peoples have ever suffered on the face of the earth. Then what appeared briefly as a glimmer of hope in 1865—with the Emancipation Proclamation—was quickly put out by the nightriders, enforcing the cruel Jim Crow segregation laws that institutionalized racism for the next 100 years.

But over and against the filibustering democratic congress, Civil Right laws were passed in 1965, ushering in the beginning of the end of the nightmare of American institutionalized racism. However, change takes time and persevering until it comes takes courage. The hatred inflicted upon African descendants for three hundred and fifty years made two Americas—separate and very unequal. Racism created one America for African Americans and another for everyone else. Over the centuries that passed from 1619, the cultural divide between these two Americas grew deep and wide.

Few expected the social conditioning of racism accumulated for nearly four centuries to evaporate overnight. Few assumed the deep emotional scars inflicted upon the psyche of African Americans would be healed in days, weeks, or months. Few thought that the weightiness of the collective guilt of hate crimes perpetrated by many (but not all) White Americans would disappear as a result of one vote. Everyone looking realistically for the day when America would live up to its ideal of judging people based upon the content of their character rather than the color of their skin knew that the journey to equal treatment of African Americans would take years and even decades.

I was born in January 1964, at the dawning of the first rays of hope that America would be America for African Americans too. I am among the first African descendants of America who possessed all the rights of other Americans. I didn’t have to ride on the back of buses like my mother. I was never told that because I was black I wasn’t smart enough to have a job like my father. My children have never been sold away like my great great great grandmother’s or my wife raped by a white man. I do not fear hooded night-riders pulling my son out of my home, beating him, burning him, and then hanging him for disrespecting a white woman. I am among the first of African descendants in America whose success will be determined by embracing the American spirit of determination and hard work rather than having to accept failure because I lacked white privilege.

As an African American conservative, I differ with President Barak Obama on a long list of substantial issues. But on this fundamental issue relating to racism I enthusiastically agree: For decades America has not been static in dealing with its racist past, as Reverend Wright and others have supposed. Instead, it has made steady and significant progress. Because of Ruby Bridges, Rosa Parks, and Martin Luther King, I went to the school of my choice, as did President Elect Obama, as well as many other African Americans. Because of the continual death of racism, America would have elected its first Republican African American president 13 years ago had Colin Powell chosen to run. The proof that America’s break from its past didn’t happen last night is last night itself. With worldviews informing them that the economy, national security, social issues, or abortion were of primary concern, millions and millions of Americans voted for a certain candidate they believed embraced their concerns. Unlike Americans generations ago, the great majority of Americans who voted for or against an African American candidate didn’t consider his skin color as a determinative factor. The post slavery, post Jim Crow Law, post civil rights generation of Americans have a radically different outlook on race and racism than our fore-parents.

Is racism in America completely dead? Of course not, and it never will be. So long as people are sinners and different, some will choose to sin by elevating their differences over others. All ethnic groups will experience this evil. But racism as an institutional evil perpetrated by Whites primarily against African Americans is a relic of the past. If this were not true, then we would not be celebrating this first black President-elect today.

The task now, and my prayer is, that for my African American brothers and sisters, (1) we take steps to consciously help close the door to a painful chapter in America’s history, (2) we stop fighting the ghost of past white-only forms of racism, and (3) we take the responsibility upon ourselves to work with White and other Americans.

And for my Christian brothers and sisters, we must affirm that God has only made one race—the human race—and we need to model for the rest of America the task of bridging the cultural divide caused by four centuries of racism. This is a critical hour for our nation and the world. If you, like I, believe that the church plays the most critical role in the revival of our nation or its demise, then we must embrace the task of uniting the church, for together we’ll stand or divided we’ll all fall.

You are welcome to post this as a guest blog on your site.
Posted by Pastor Bobby Scott at 4:20 PM

Email ThisBlogThis!Share to TwitterShare to FacebookShare to Pinterest
Labels: It's in the News

I was invited to your blog by Pastor Fitts and I am elated at what I read. Yes, racism will continue, but the door to the past must be closed. We can't trade the last 44 years (referencing the civil rights decision) for the last 400, but we can stop reliving the past as an African-American community and begin some REAL healing.

I've often remarked that so many blacks have sought to make whites understand our struggle and I have felt that was the wrong approach. It's only something that we can understand, but we have to move on. Barack is not just a symbolic gesture. This is reality. You don't get elected President of the United States as an African-American male and there not a a racial paradigm shift occurring. It just doesn't happen.

Will we still be affected by racism? Yes. We people still be racist towards blacks? Yes. Should I let it fester and keep saying the white man has his foot on my neck? NO! That day is emphatically over and it's time to heal. We should focus on the advancement of our community. It's no longer external, but internal and we can't keep blaming everyone else. We're starting to sound like the 40-year old who continues to blame his failures on the actions of his parents and never wants to take responsibility. I refuse to be a part of that group.

My name is Dianna and I found your blog from SecretSexWars Call for Purity videos on God Tube. And, boy am I glad you did. I mean, really, wow...... Though, I am a white woman living in the south and I have not personally faced blatant racism, you so, so, so speak for me. This blog, is, BY FAR the very best writings (sermons) that I have found on the issues facing us today, and I'll tell ya, I've read a ton. I recently wrote a post to the maker of the purity videos telling him that I believe that the Holy Spirit lead me to hear his testimony and view his works. I know that even more after reading your blog.

I will certainly be praying for you ministry.